Sounds like a philosophical conundrum along the lines of “when a tree falls in a distant forest etc”, doesn’t it? But the answer is quite straight-forward. Context –  I was having a conversation with a very well-connected art-world friend yesterday, and we were bemoaning the misuse of terminology when people refer to questionable works of art.

‘Forgery’: a work of art made to deceive.

‘Fake’: a work of art which has been identified as misattributed (credited to the wrong artist), but not in a way that was deliberately intended to deceive.

So the terminology is very simple to grasp. 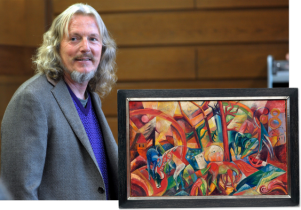 Wolfgang Beltracchi with the forged Heinrich Campendonk painting sold at auction in 2006 for $3.6 million. (Image via Vanity Fair: http://www.vanityfair.com)

Example of a forgery: the paintings made by German forger Wolfgang Beltracchi in the manner of modern masters including Léger and Ernst. He fabricated two bogus collections – the ‘Knops’ and ‘Jägers’ – to give his forgeries a provenance and managed to dupe many prominent experts and collectors including comedian and writer, Steve Martin. Beltracchi was sentenced to six years in prison in October 2011 for forging fourteen paintings worth $45 million (the whole messy saga is documented in an extensive article in Vanity Fair, which you can find… here.)

No question at all that the paintings Beltracchi made – and it’s suspected that he may have made many thousands that have yet to be (and most likely will never be) detected – were forgeries.

Example of a fake: I’m always pulling this one out as an example, but it’s so clear-cut it’s hard to resist. The National Gallery of Victoria’s painting-formally-known-as-Van-Gogh. It had been in the NGV collection as a work by the Dutch master since 1940, but in 2007, the Van Gogh Museum questioned its attribution, and declared it to have been made by hands other than Van Gogh’s. It was determined that it was made by one of his contemporaries, but that there was no intention to deceive by the misattribution. It was simply a case of mistaken identity.

Sounds easy, right? Sadly, as is often the case in the art world, there are so many – certainly more than fifty! – shades of grey. Ponder the following:

I could go on ad infinitum. But I shan’t. I’ve bored you enough already. Suffice it to say it is a very, very fraught area.